Here it is, the first in a series of () 5 posts on how to make something new from old Windows Server Applications that you may have running on-premises wasting a lot of hardware and energy.

When you do an assessment of running applications in your Windows servers, as a best scenario, you may find some old web apps running on an IIS server that could be migrated using a semi-automated tool, but, in my experience, there are lots of not-so-edge cases that won’t be as easy as that. Recently, I stumbled on a TCP/IP server application written in VB6 that was running in a few hundred virtual machines. At first, you may think that this application does not deserve the effort and it would be better to do a complete rewrite. Well, on the one side, from a developer or operator point of view you are completely right, but, on the other side, from a business perspective it’s all about trade-offs, and you may not have the budget to build a new app from scratch. So, what if you could reduce the current solution cost by containerizing it, so you save in hardware, and use these savings to push for the rewrite of a new and modern solution? Let’s talk about it.

Is this even possible? Visual Basic 6 is not the popular programming language it used to be anymore, and nobody would use it for new developments. But, the reality out there is that there are still a lot of legacy VB6 applications running in production systems; as proof of this, you can still find people asking new questions on Stack Overflow. It is to such an extent that, even though the IDE has been retired since 2008, we still provide support for the runtime in “It Just Works” mode up to Windows Server 2019 and Windows 10.

This means we can create a Windows Container image that will run VB6 applications, and we can use this image to run VB6 applications in a Kubernetes cluster, without any changes to the application itself and without the hassle of maintaining hundreds of Windows Server machines separately (but remember you still have to do some updates and patches).

Side note: remember that containers are headless machines, so we won’t be able to run a Remote Desktop session or any graphical interface action in these Windows Containers.

In this series I’m going to explain how to: 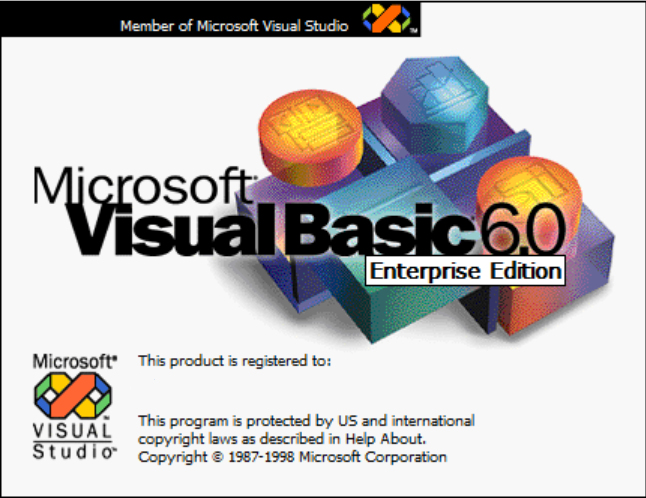 I’m going to use some very simple example code, but there’s no sense in doing a deep explanation of what it does. You can find the code in the folder named source from the GitHub repo. Let me explain some basics below.

The app is a simple TCP/IP server to check that our system is running the app, it is serving content, and to demonstrate that you can use old OCX components. So, you can communicate with this app via Telnet on the 9001 port. The app will answer with the server name upon connection:

We will use an old trick to force the app to run in console mode, using this command line:

To create a container image, first, you need to create a Dockerfile file. This file will contain the list of commands and instructions to build the image as an unattended process, that is, you won’t be able to interact with the install process, but once created the image will be completely prepared to run.

So, we will write in the Dockerfile the steps to prepare and install our application. The file begins indicating that we will use the (`) as an escape character, to avoid problems with the backslash (\) used as folder separator in Windows. The next one indicates the Windows version for the container. As we pretend to run it inside Kubernetes, we will use the servercore ltsc2019 version, the one compatible with the Azure Kubernetes Service (AKS).

The following ones create the folder for our application and copy and register the ActiveX component:

And, finally, we indicate the port, copy all the application files, and indicate the command that will run once our container starts:

Note: I copy and register the MSWINSCK.OCX before all the other ones, even though they reside in the same folder, and then I copy the rest of the files in a later action. This has a negative impact on the number of layers our container will have, but it comes with an advantage because as the OCX installation takes a lot of time and this usually does not change, but the application may change often, we can use the Docker layer to avoid repeating the install process each time we make a change in the application. Docker will use a cached copy to speed up the build process.

Once we have the Dockerfile, we can build the image using the following command:

We can test it by running it and publishing its port:

And once it is running we can connect to it using a telnet client:

If everything is ok, we should see something similar to the following message, with the container id as the server name:

This id, which we also saw with docker run, will be useful to debug and manage our container. Docker will also generate a random name that we can use for this same purpose, but it is easier with the id, because you can use the first two or three digits to execute some commands in your container instance. In our case, the id is c433ff27..., and we can run any of these commands:

We made it easier to fit an old application into our DevOps workflow. We are generating a container image that is easier to move and deploy than a VM image. In the next article, we will see how to deploy it to Kubernetes, and take advantage of all the benefits that it offers, like the ability to automatically restart the container if it crashes.